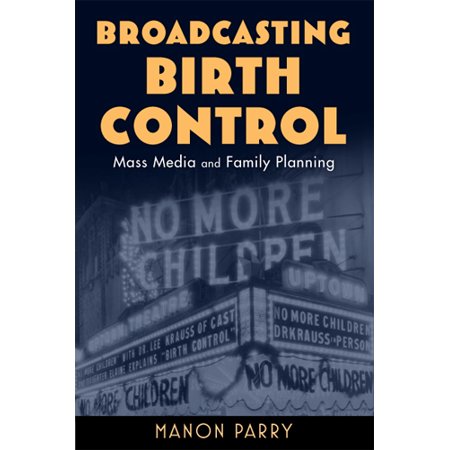 Traditionally, the history of the birth control movement has been told through the accounts of the leaders, organizations, and legislation that shaped the campaign. Recently, historians have begun examining the cultural work of printed media, including newspapers, magazines, and even novels in fostering support for the cause. Broadcasting Birth Control builds on this new scholarship to explore the films and radio and television broadcasts developed by twentieth-century birth control advocates to promote family planning at home in the United States, and in the expanding international arena of population control.

Mass media was critical to the birth control movement’s attempts to build support and later to publicize the idea of fertility control and the availability of contraceptive services in the United States and around the world. Though these public efforts in advertising and education were undertaken initially by leading advocates, including Margaret Sanger, increasingly a growing class of public communications experts took on the role, mimicking the efforts of commercial advertisers to promote health and contraception in short plays, cartoons, films, and soap operas. In this way, they made a private subject—fertility control—appropriate for public discussion.

Parry examines these trends to shed light on the contested nature of the motivations of birth control advocates. Acknowledging that supporters of contraception were not always motivated by the best interests of individual women, Parry concludes that family planning advocates were nonetheless convinced of women’s desire for contraception and highly aware of the ethical issues involved in the use of the media to inform and persuade.

“Manon Parry’s engrossing book, Broadcasting Birth Control, takes readers through the arguments early sexual and reproductive health advocates had when deciding what would be the best messaging to gain popular support for the use of contraception in America.”
—International Planned Parenthood Federation

“Parry’s clear, compelling, meticulously researched, and accessible book is the first to specifically examine the extensive use of mass media to garner support for the legalization of birth control during the twentieth century.” —Heather Munro Prescott, author of The Morning After: A History of Emergency Contraception in the United

“By showing how the popular media helped win over a skeptical public, Parry deepens our understanding of the history of birth control . . . a subtle and persuasive reinterpretation.” —Sonya Michel, University of Maryland

” Broadcasting Birth Control is jam-packed with surprising historical tidbits on ways the media has been used by the family planning movement since its inception. Manon Parry has done a major service to the family planning field by capturing the history of its early engagement with the media and the evolution of that engagement with all the pitfalls and challenges along the way.”
—Conscience: The News Journal of Catholic Opinion (review)

“Parry reveals to us many important parts of the [birth control] story we have for too long overlooked.”
—Social History of Medicine (review)

“[A] fine survey of the mediation of birth control.” —Journal of American History (review)

“Especially novel is her analysis of how communications experts continually reevaluated different theories of
mass communication as they struggled to design effective international family planning campaigns.” —The Public Historian (review)

“Clearly, Broadcasting Birth Control not only makes a significant contribution to the history of birth control in the United States and its transnational repercussions, but also to American media studies. Thus, Parry’s work represents an important interdisciplinary intervention and is sure to be of interest to scholars in numerous fields ranging from women’s studies, to the medical humanities, to communications.” —Medical History (review)

“Broadcasting Birth Control is interdisciplinary, grounded in history but utilizing media studies analysis to take readers up to the twenty-first century and current debates over birth control and media ethics. It is also transnational in scope, linking USAID campaigns in the developing world beginning in the 1960s to more recent birth control campaigns abroad.” —Women’s Studies (review)

€315,000 research project studying the social relevance of medical museums, culminating in a book and exhibition at Special Collections, University of Amsterdam. While the collections of medical museums, including human remains, are sometimes labeled as “curiosities,” the title refers instead to the idea that it is entirely human to be curious about bodies and that curators can harness that interest in socially-useful ways. However, stakeholders at medical museums disagree on the role of their institutions in contemporary society, on the capacity of audiences to understand complex or sensitive medical issues, and on the most effective exhibition strategies. This project analyzes current medical museum exhibition strategies to identify dominant narratives as well as marginalized histories, and investigate their implications for health and wellbeing.

The focus includes four areas where medical museums could make a significant impact: mental health, infectious diseases, sexuality/reproduction, and bodies of difference (addressing race and disability). This research is of direct relevance to museum practitioners, and is therefore being developed in collaboration with medical museums. Project output includes a Heritage Lab demonstrating interpretive strategies for medical heritage, an online tool for museums and their audiences, as well as an open access journal article and a book. The project will provide the first detailed analysis of exhibition strategies across a range of European medical museums, and the first in-depth study to specifically consider the role of medical museums in promoting health and wellbeing.